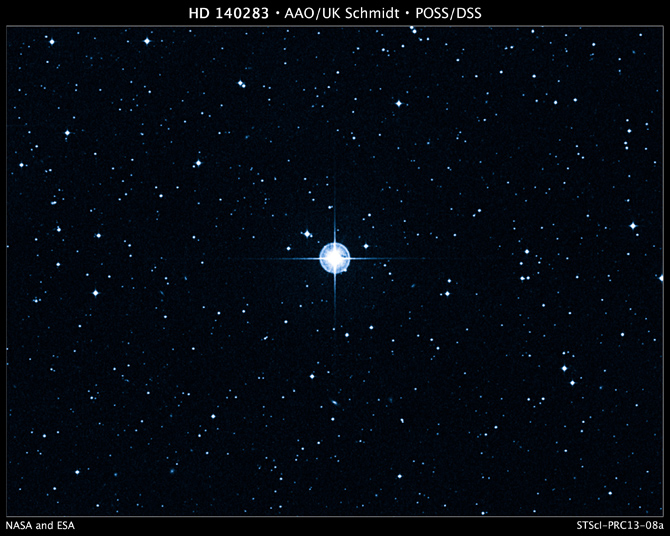 This is a Digitized Sky Survey image of the oldest star with a well-determined age in our galaxy. The aging star, cataloged as HD 140283, lies 190.1 light-years away. The Anglo-Australian Observatory (AAO) UK Schmidt telescope photographed the star in blue light. Credit: Digitized Sky Survey (DSS), STScI/AURA, Palomar/Caltech, and UKSTU/AAO

A team of astronomers using NASA’s Hubble Space Telescope has taken an important step closer to finding the birth certificate of a star that’s been around for a very long time.

“We have found that this is the oldest known star with a well-determined age,” said Howard Bond of Pennsylvania State University in University Park, Pa., and the Space Telescope Science Institute in Baltimore, Md.

The star could be as old as 14.5 billion years (plus or minus 0.8 billion years), which at first glance would make it older than the universe’s calculated age of about 13.8 billion years, an obvious dilemma. This is going to be a strom in the cosmology world, as most believe that the univsere 13.7 gigayears (billion years) old – admittedly its only an estimate, but one that will be pushed back.

But earlier estimates from observations dating back to 2000 placed the star as old as 16 billion years. And this age range presented a potential dilemma for cosmologists. “Maybe the cosmology is wrong, stellar physics is wrong, or the star’s distance is wrong,” Bond said. “So we set out to refine the distance.”

The new Hubble age estimates reduce the range of measurement uncertainty, so that the star’s age overlaps with the universe’s age — as independently determined by the rate of expansion of space, an analysis of the microwave background from the big bang, and measurements of radioactive decay.