The biggest 3-D map of the distant universe ever made, using light from 14,000 quasars – supermassive black holes at the centers of galaxies billions of light years away – has been constructed by scientists with the third Sloan Digital Sky Survey (SDSS-III).

THE HUNTING OF DARK MATTER

The race to detect dark matter has yielded mostly confusion. But the larger, more sensitive detectors being built could change that picture soon. 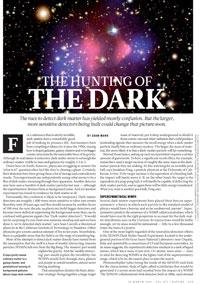 The Keck I Telescope has played a key role in unraveling the mysteries of one of the brightest supernovas ever discovered. Fermi’s view of the Milky Way and beyond

Annihilating dark matter at the heart of the Milky Way could account for signals detected by two space telescopes, according to a pair of US physicists.

A heavyweight, and controversial, cosmic-ray detector is set to head for the International Space Station.

We live in a magnetic universe, but much about magnetism at cosmic scales remains unknown.

The magnetic field at the Milky Way’s core is at least 10 times stronger than that of the rest of the galaxy.

Another universe tugging on ours? Maybe not, researchers say A new study from the University at Buffalo contradicts the dark flow theory, showing that exploding stars in different parts of the universe do not appear to be moving in sync. Working with data on 557 such stars, called supernovae, UB scientists deduced that while the supernovae closest to Earth all shared a common motion in one direction, supernovae further out were heading somewhere else. An article announcing the research results will appear in a forthcoming edition of the peer-reviewed Journal of Cosmology and Astroparticle Physics. 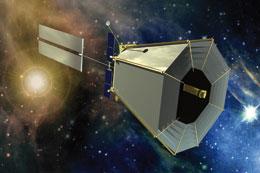 NASA’s constrained budget is encouraging some creative pairings. This week, scientists eager to find other habitable worlds explored the possibility that a future space telescope for probing the origins of stars and galaxies could serve their needs as well.

Xenon100: ‘We hope to detect the largest proportion of the matter in space’ The underground laboratory at Gran Sasso in Italy is the home of the Xenon100 experiment, which is being conducted as an international collaboration that includes the Heidelberg-based Max Planck Institute for Nuclear Physics to detect the mysterious particles directly. The researchers recently published the evaluations of one hundred days of measurement time. The result: although there is no significant signal for dark matter as yet, the world’s best limits for the masses and interaction strengths of the WIMPs have been obtained, and already noticeably reach into the predicted range. The concept of time as a way to measure the duration of events is not only deeply intuitive, it also plays an important role in our mathematical descriptions of physical systems. For instance, we define an object’s speed as its displacement per a given time. But some researchers theorize that this Newtonian idea of time as an absolute quantity that flows on its own, along with the idea that time is the fourth dimension of spacetime, are incorrect. They propose to replace these concepts of time with a view that corresponds more accurately to the physical world: time as a measure of the numerical order of change.