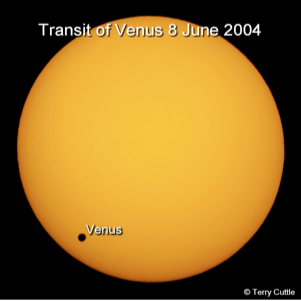 I understand they will be doing the same thing this yearâ€¦ and I will be going as well.

The second is the Sutherland Astronomical Society (largest such group in Sydney) â€“ they have their own observatory, and itâ€™s a good one too. They too are going to have a â€˜transit partyâ€™

Incidentally, I am giving Â a presentation to this group (in response to an invite from them after reading some of my articles in Cosmos) entitled: â€œCosmology and the role of the General Theory of Relativity.â€ Which will be 2 nights after the transit â€“ this will be the first time that Iâ€™ve given a presentation to this group, and I feel a bit intimidated by it as itâ€™s a 90 minute presentation and they usually get university lecturers to do such presentations â€“ fingers crossed that I have my ducks all in a rowâ€¦

I didnâ€™t see the 2004 transit as I was overseas at the time but I wonâ€™t miss this one! Here is an Australian site dedicated to the transit that you may find interesting as well:

Incidentally, Jeremiah Horrocks was the first person to successfully predict and observe the transit of Venus in 1639.

But the BIG news is really the total solar eclipse in Cairns, which is at the top of Queensland, that is the big news. Cairns is 3 hour flight and 2 hour drive from my home but we have our flight booked and our hotel booked ready – I am taking my two nephews as well, one is at Uni and the other is very interested in astronomy as well. Here in Australia its big news for many people and most of Cairns is booked out â€“ I will taking my telescope and HD video camera, together with a suitable filter, to film the event â€“ so itâ€™s really exciting â€“ itâ€™s my first total eclipse. I have seen a couple of partials but never a total! Here is an Australian website with some more details:

By November it should be dry, also Cairns gets tropical rain and as the eclipse is just after sunrise it will 95% be dry, I just hope itâ€™s clear skies!